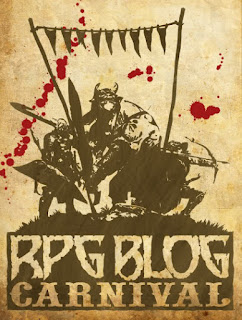 I saw a post from ShinobiCow over at The Dump Stat about the May RPG Blogger Carnival. This month is all about mixing genres in RPGs. And here I am, posting at the very last day in May - just under the wire! As players of the Adris game know, mixing genres is pretty common in my games. I'll look at a couple of my game settings and see what genres we can find.

Wumpus Quest
Wumpus Quest was a farce without boundaries from the very start. I wanted to make an oddball evil game, so I had people roll up evil characters and go to town. I started the absurdity early with the Book People - each person had a book and could only speak in quotes from that book. If you lucked out with a novel with heavy dialogue, good for you. If you had a dry reference book or, say, a dictionary, good luck with that.

After that, the characters tripped across a dimensional nexus shaped like a d8 with a different portal on each nexus. They jumped through and landed in a cyberpunk world, or in a land of dinosaurs, or in the middle of the French Revolution. Wumpus quest took time-hopping and wrote it large without regard for consequences since the characters just left after causing as much damage as possible. Ridiculous fun, but not very sustainable.

Adris
Adris started simply enough as straight high fantasy - it started as my D&D 3e test game that went on for 5 years and upgraded rulesets to 3.5 halfway through. It was based on an Evil PC game I started in college that would never work since the PCs did nothing but eye each other suspiciously once they got together. can you tell I had a thing for unsustainable games for a while? So I took those evil characters and made them go their separate ways, gaining power to become the bad guys behind the next game.

Since the Adris game was my D&D 3e test game, I downloaded and ran The Burning Plague as a starter. Things went well, then I spun off in my own direction, eventually discovering the older names of the gods, cultists trying to consume the world in black flame, defeating a lich who wants to ascend to become the god of Madness, reopening the Astral plane so all the gods can contact their followers, stopping the Drow from stealing all the world's magic (changing to 3.5 rules in the process), and rediscovering the space-faring races (elves, dwarves, and humans so far). The overarching story involves collecting the seven cubes, artifacts dedicated to each of the seven gods, which I detailed a bit over here on StackExchange.

There was a fair amount of high magic fantasy heroics, but once they started fighting mechs and stopped a shuttle from escaping, the players understood just how cross-genre this game could be if they wanted. I used a fair amount of Call of Cthulhu-style investigation in my heavily-modifiied running of L2 The Assassin's Knot. The party is starting to discover interstellar politics. The last adventure involved githyanki and shadow red dragons building a nuke using magic items as fissionable material. Present-day, far future, and fantasy worlds collide in the Adris game!

My Highcastle setting exists on one segment of a ringworld, with a tip of the hat to Larry Niven. It's set 10,000 years

after the cataclysm on Earth, and the Great Elves helped the refugees settle in way back when. Technology and magic coexisted, then almost destroyed everything when war was declared to stop the summoning of The Nameless One. One continent was devastated with magical fusion weapons, creating the Sea of Glass, and The Nameless One was imprisoned on one of the Wandering Islands. Now the elves are charged with enforcing the Pact, which prevents humanity from developing technology. They can maintain current technology, like the ultra-modern septic system under Highcastle or the antigravity units holding the castle above the market square, but new development is strictly forbidden.
So that's post-apocalyptic, space opera, fantasy, and Secrets Man Was Not Meant To Know all rolled into one game, at least in the setting history. Granted, this was my first setting and I kept adding bits I thought were cool to the mix. Maybe it's grown beyond where it should, but it exists as my own playground so I think I'll keep adding to it as the mood strikes me.
During play, Highcastle has been mainly heroic fantasy, with other elements based on the group. When 4 PCs and 6 skeletons crammed themselves into a 10'x10' room and tried to duke it out, we coined the term "Keystone Cops Go Adventuring", and the rest of that game was filled with pun names and slapstick adventures. Later games were fairly heavy on the conspiracy front with shades of Call of Cthulhu seeping through the cracks, but they had their moments of outright laughter as well. This follows the Stargate SG-1 TV series model: It's a comedy at heart that deals with serious stories.
I remember the time the PCs summoned an imp to deliver a message. This imp wasn't the sharpest knife in the drawer, and it couldn't figure out how to break through the magical wards around the Transmuter's house. It had to deliver its message, so it got as close to the barrier as it could and shouted at the top of its lungs.
Thinking Cross-Genre
I try not to discard ideas just because they don't fit in the main genre I've chosen. Cool and story trumps environmental constraints like genre or game rules. If it adds something unique to your game, by all means sprinkle a different setting or play style into your game. That said, suddenly introducing your D&D group to the wide world of planetary intrigue without preamble might not get the most favorable response, especially if it seems to be deviating from your story by not building on the history the PCs have witnessed or made.

My best advice? Listen. Do what your group wants. If they keep making "I want something different" noises, throw them some oddball hooks and see which ones they bite on. People disappearing on nights with falling stars? Sounds like a decent hook. Will they buy alien abductions? In an ongoing campaign, it's your job as a GM to know the answer to questions like that.

I've done a lot of organic cross-genre campaigns because I have an awesome group of players who can really roll with the punches. If you can convince your players to leave their expectations at the door, you can probably do the same thing. In any case, be very clear with your players that you're planning on taking a left with your genres and play style or you'll be dealing with failed expectations and hurt feelings.

Remember, it's a game. If it ain't fun, it ain't worth it.
Email ThisBlogThis!Share to TwitterShare to FacebookShare to Pinterest
Filed under: genres, settings