Yesterday someone asked about an online resource for comparing and contrasting every edition of D&D and retroclones. And I thought, "That could be useful." And I thought that I could probably take a stab at it, using a Consumer Reports-like grid to indicate the existence of classes and skills and level limits for non-humans and THAC0 and positive or negative ACs. 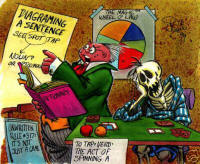 And my mind started to spin in the peculiar way that it does when the game design engineer in my head gets ramped up to pick out the nuts and bolts of rules and fiddly bits. The endorphins get released and I can see the shining PDF completed and available for download, and I forget the pile of work that it will take to get the idea to that point. I can feel myself slipping down the slope of losing myself to the idea, of blissful hours debating with myself about including non-weapon proficiencies or not, of fiddling with the rules and deciding what's important.

And I reread that last phrase: "Fiddling with the rules and deciding what's important."

In that moment, I heard this Ze Frank acceptance speech echo through my head (after the dick joke):


We're gamers. We play games wherever we can: in basements, around the kitchen table, at conventions, in a sterile conference room at work, in game rooms and dining rooms and living rooms and bedrooms, even on a roof in the rain. We play to feel better about ourselves and to create stories we want to tell ourselves for years to come. We game to create memories and share them with others, and the places we choose to game become so much window dressing. The friends and the memories are the core of the experience; where it happens fades into the background as merely setting and embellishment.

And what is a game other than a mutually-agreed-upon space in which to create those memories? We could stage a play, or form a knitting circle, or play team sports, or square dance, or a million other activities where people come together and do something, but we choose to play games. We could debate the rules and analyze the hell out of everything we do, but that's the equivalent of sitting there and talking about what color the walls should be at a square dance. It's debating about the space and not the activity, which is why we get together. Sure, it's useful in its own way, but we're missing the big point because we're not dancing.

From a gaming standpoint, the rules make the structure of the space we game in. So if we want a gothic stone cathedral with flying buttresses (WoD or Warhammer) or the ruins of a toy store filled with shape-changing dolls (Gamma World) or a shadowy house with something living in the basement (Call of Cthulhu) or a flophouse just off a rainy street bathed in neon light (Cyberpunk) or an intricately-worked manor house overlooking a dungeon entrance (D&D), we can decide to use or customize or build that structure and play in it.

So sure, I could dust off my Rules Lawyer Hat and debate the merits of a manor house vs. a toy store, or the effectiveness of rule X vs. rule Y, both of which will get me engaged but not in an altogether positive way. And I like to think I'm not a total dick, even when I act like one. And I may work on the field guide to D&D editions, but I thought I'd stop and follow my thoughts for a minute.

What's important? Spending time with friends and stengthening the bonds between us by sharing experiences. Finding new friends through the medium of gaming. Smiling and laughing and emotionally investing in the present moment. Being a social creature with people who share some of my interests. Feeling like I'm expanding my tribe.