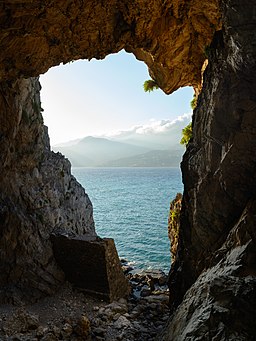 She rounded the final bend and saw the tunnel open onto the sea. She stared at the beautiful crystalline depths of the sea she had hoped to avoid, but saw only mockery and defeat. Captain Fisher's ancient survey maps had led her astray. Again.

If only she had insisted the Old Goat pay her something up front, but he had called in a huge favor. Worse yet, he sent his crew's doctor to talk her into bailing his ass out of jail after he tried to bribe a theocracy official with a flask of single malt. Typical. She dragged a hand through her red hair, adjusted her rifle, and exhaled. For the tenth time today, she muttered her less-charitable nickname for the Old Goat, which became her mantra every time she had to pull him out of whatever rathole he blindly ran down this week:

She could swim across, but she wasn't sure if she could make it the whole way with her pack weighing her down. She could seal her vacc suit and walk along the bottom, but her pack wasn't rated for submersion. She had her inflatable emergency raft, but she didn't want to attract attention, and the raft was designed to be seen from orbit. That left backtracking three clicks up the tunnel, and she wasn't sure the log across the underground chasm would hold her a second time. She sighed. "Duckfucker."

She hoped the cave would shelter her until she could hack the distress signal rig off the raft, so she set to work, repeating her mantra at every new challenge. Her year spent in contemplative solitude on Sarum had taught her to deal with stress and stay focused. Captain Fisher provided her mantra, for which she was thankful in an odd way, at least when she wasn't stuck walking across half a planet to look for something that might not be there using painfully outdated maps. She funneled her anger against Fisher and put it to excellent use, modifying the raft in record time.

She loaded her rifle and pack onto the raft and pushed off from the tunnel's mouth. If the paddle held and the wind cooperated, she figured she had about an hour on the open water. Not ideal for defending against joyriding pirates, but at least her gauss rifle didn't kick much. And if they brought in reinforcements, she could break into her stash of grenades.

Forty-five minutes in, she heard a grav scooter's distinctive whine across the water behind her. She saw it pop above the cliff and head off inland far to her right. "Duckfucker." She paddled for shore faster, knowing she had limited time before someone spotted her neon-orange raft on the water.

Another scooter appeared over the cliff and circled for a lazy minute before turning and heading straight for her. "Oh, Duckfucker." She paddled harder, peering over the side of the raft as the sandy bottom slowly rose toward the water's surface. She glanced back. Those scooters were damned fast. "Duckfucker." She heard a few distant pops and wondered how stupid you needed to be to fire a cheap semi-auto pistol from a moving vehicle a half-click out and expect to hit anything.

She leaped out of the raft as the scooter closed in, but she misjudged the depth and had to tread water, dragging the raft behind her. Worse yet, she couldn't reach her gauss rifle. The scooter pilot shot again. Bullets splashed in the water around her like pebbles thrown by an angry god. A lucky shot punched through her armored suit and grazed her arm. "Duckfucker!" She released the raft to dive deep and swim for shallower water.

She knew the crystal-clear water wouldn't give her any visual cover other than refraction, but it would slow down bullets in a hurry. She pulled her revolver out and braced her feet against the bottom. She waited for a lull in the gunfire. She burst out of the water. "DUCK, FUCKER!" She sighted the confused scooter driver and pulled the trigger twice. The first shot went wide as it blew the sea water out of the barrel, but the second tore through the man's leathers and caught him squarely in the shoulder. He fumbled his gun, slapped another clip in, and fired wildly in her general direction. He swung the scooter in a wide arc, intent on escape.

She blinked water out of her eyes, lined up her shot, and fired once more at point blank range, catching him in the side and knocking him off the scooter. He fell, unconscious and tumbling, and hit the water hard. The scooter pulled up short and descended slowly.

She pulled her rifle and now-dripping pack out of the sagging raft. Apparently one of the pilot's bullets poked a hole in the bottom. "Duckfucker!" The downed pilot bobbed face down in a widening pool of red. She shouldered the pack and waded over to the empty scooter. She'd check for water damage later when she cleaned her weapons.

She heard the second scooter screaming back over the tip of the inlet. She grabbed the still-running scooter and dragged it toward shallower water so she could climb aboard. She knelt on the board like the circuit pros did, braced her rifle on the handlebars, and pivoted the scooter toward the oncoming scooter. She thumbed the switch to Full Auto. "Duck. Fuck. Er." She squeezed the trigger. Electric cracks echoed across the water like the sound of an angry desktop thunderstorm. A cloud of needles raked scooter and rider alike, slumping the pilot over the handlebars and accelerating the scooter down into the sea with a majestic splash.

She stood on the scooter and shouldered her rifle. Now at least she could fly. "Duckfuckers."

She turned the scooter inland and accelerated toward the forest before anyone else showed up. Behind her the second pilot broke the surface and took a breath, his eyes following the departing scooter.


Note: I took the picture of the day (Sunday) at Wikimedia Commons and used that as inspiration to spin some fiction. This fits into a wider story, but sometimes it's good to get snippets of action recorded before they flee. Thanks for reading!
Email ThisBlogThis!Share to TwitterShare to FacebookShare to Pinterest
Filed under: fiction, Traveller