Plugging a Couple of Lightweight RPGs

I just wanted to get out a couple of quick plugs for those of you looking for lightweight RPGs. I hear there's some call for them. There are several out there to choose from, but I've had my head in these two systems quite a bit lately. 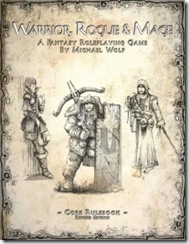 1. Warrior, Rogue & Mage
I just completed the first in what I hope to be a series of RPG Sessions for Kids. For the rules, I used Warrior, Rogue & Mage. I hacked WyRM a bit, adding multiple levels of skills, the +5 instead of +6 for an exploding die, and the damage rules from Resolute, Adventurer & Genius (pulp action WyRM, and definitely worth a look if you're into that genre). I changed some of the skills and weapons, adding a little variety to both. I hacked the fantasy racial bonuses and changed them into a pick list of advantages and disadvantages. I think that'll add some flexibility in character creation.

I extended the talent list quite a bit. I dug up the old idea of a Summoner, a spellcaster who can do nothing but summon imps and sprites to do his bidding, so I added that idea in. I've always loved the idea of spells being cast through weapons as part of an attack, so I added the Mageblade talent. I added the Shield Expert and Shield Master talents, and I added Weak Attributes, for when your character is really, not even a little bit, really not a Warrior.

The system is Attribute + Skill + 1d6 compared with a target number. The exploding dice (top-ending rolls of 6) makes life interesting and tremendously unpredictable. The three title attributes lets me scribble down usable stats for a mook in 2 lines and an NPC in 3. I had a reference sheet all printed out for my first run, but the system was so intuitive that I never even looked at it during play.

If you're interested, grab a copy of the published rules from the links above. You can also download my Excel 2007 WyRM reference sheet with all my hacks that I pulled together for quick reference during play. I didn't do anything for spells, but I'll either add that as a separate sheet or cram it in with Equipment. I printed the reference sheet landscape 2-up and 2-sided so it fits on one piece of Letter-sized paper, but your mileage may vary. You can also download the blank character sheet I made (you'll need the Hingham Text font and Excel 07), and the pre-generated characters I made (10 of them).

2. BareBones Fantasy
I got hired as the editor for BareBones Fantasy a few months back. There have been many revisions along the way, but the finished system just released this morning on DriveThruRPG. I may be biased, but I think it gives you everything you could ask for in an RPG: solid rules, great systems to fiddle with, a sketch of a setting to build on, and good-looking art throughout.

It's percentile-based system, where you roll under your attribute or skill to succeed. It's very much like the Chaosium Call of Cthulhu rules, but with only 7 very broad skills. Anything not covered by a skill goes against one of the 4 attributes in the same manner. Critical success or failure happens on doubles, which I think is an elegant way to factor skill into the crit equation.

There's a short spell list, but each entry pares down the spell to its base function. It's up to the caster and the GM to give each spell the effects and character to bring it to life. For example, Offensive Strike lets you cause damage, but you get to decide if it's a fireball, or falling rocks, or a summoned swarm of locusts with razor-sharp legs.

The random generation section really stands out. There are tables for adventure ideas encompassing objectives and obstacles for each scene (recover the maguffin and save the princess while bringing the guilty to justice before time runs out, for example), random dungeon maps (take that, AD&D DMG!), traps, creatures, treasure, and non-standard adventure rewards. These systems and tables provide a pile of ideas and little bits you can inject into any fantasy game. To me, those 10 pages alone are worth the price, and you get the rest of the system for free!

Both rule systems are really easy to internalize so you're not looking things up every 5 minutes, and neither suffers from supplement creep. BBF is designed as a single-volume ruleset, so I don't think too much will be added outside of setting description and adventures. WyRM does have a handful of short supplements to extend the rules with options, but they're not needed at all. People are hacking WyRM into their own self-contained system books, and I can't wait to read the SF-flavored hack when it comes out.

So if you're in the market for light fantasy RPGs, I suggest you look at these two systems.
Email ThisBlogThis!Share to TwitterShare to FacebookShare to Pinterest
Filed under: Kids RPG, plugs, RPG Editing, WyRM