Day 19: Jacques the Knife has returned to cut again.

I finally looked around for a name other than "The Domain Game", and I settled on Domo. It's simple, but packed with multiple meanings. And, of course, there's a story that brought me to it. I'll get to that as the story unfolds.

The Bleedin' Hex Dividers
The hex dividers are the biggest time investment so far. That's hardly surprising since custom game components can suck a designer's budget dry. But I'm over the hump on that count.

After screwing around for a few days with ideas about making a plastic template that I could use to cut out the pieces directly, I took a manila folder and cut out a template to trace. I traced the shape onto the blanks with pencil, then went to town with scissors and my X-Acto knife from my Jacques the Knife days back when I was the layout guy for my high school newspaper.

Yes, newspaper layout was terribly analog back in the mid-'80s, and we cobbled that publication together every few weeks using non-repro blue graph paper, printed articles that we cut to size and pasted in, and yards of border tape to break up the inevitable white space and define the borders of a single article. I could eyeball a right angle and cut things to size pretty quickly, and I earned another nickname.

Last night I put my nose to the grindstone, and over a surprisingly short time I cut out the blanks, thus:
And then I remembered I picked this little beauty up at a yard sale: 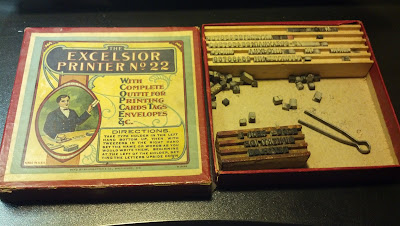 So I mashed the two together and ended up with this: 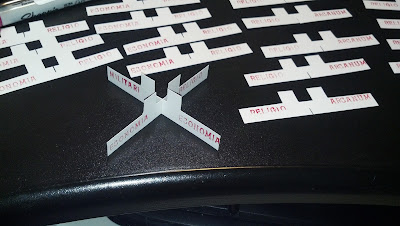 And now I've got a dozen hex dividers and a complete prototype copy. It may be hard to read in a few cases, so I might go back and add the letters at the top like in the original prototype.

But for right now, I have a complete playable game. YAY!

The sharp-eyed among you will notice that the four sides of the dividers aren't exactly the Military, Arcane, Religious, and Economic that I've talked about so far. They actually read MILITARI, ARCANUM, RELIGIO, and ECONOMIA. Funny story, that. Since the Excelsior Printer was a yard sale find, it looked like it was short on a few letters. When I started putting together the word "RELIGIOUS", I found that there wasn't a single S to be found. Using $ for an S just didn't work for a myriad of reasons. What can I do to adapt and flourish? Hrm.

I went with an abbreviation: RELIGIO. I decided it sounded like Latin, so opened up Google Translate. I looked for other bastardizations that I could print without using an S, and that's where the current list of power center names came from.

Domo: A Name, A Game, A World.
Once the faux Latin power center names solidified, I immediately started spinning out some ideas about the world of the game. What would a Religio group look like as opposed to just a church? Would Economia cover more than just trade and production? Could this work with lieutenants carving control out of a failing Imperium? I really like the direction this is drifting, and I'll probably write a snippet of fiction to introduce the world.

Then I started looking for Latin words for rulership and conquest, with a lean toward something simple. For "subjugation", the Latin verb "domo" came out. The more I thought about it, the more I liked it. It's also Latin for "house" or "of the home", and where else do you live but in your kingdom? And as an added bonus, it's Japanese for "thanks", and I'm thankful that NaGaDeMon inspired me to get something on paper.

Domo is the name of the game. Done.

Next Steps
I've got a completed prototype for 3 players. Hopefully I can do an Alpha playtest today on my own to make sure there's nothing blatantly stupid in the rules as they exist. Then I can rewrite and polish the rules for public consumption. I'll need to get a hex divider template in a downloadable form, and a list of components if you want to scavenge them on your own.

After that it's out in the wild, and let the hacking commence. Whee!
Email ThisBlogThis!Share to TwitterShare to FacebookShare to Pinterest
Filed under: Domain Game, NaGaDeMon 2012