The Shrine of the Rat God

Because +Tim Shorts asked for it, I decided to pull a map from my gaming roots. I think this was my first "I actually took some time and did a decent job with it" map, probably from late 1987. I used a mechanical pencil and drew it on the first page of a graph paper notebook purchased during my freshman year in college. Yes, that's the very same notebook that contains the maps seen in Meanwhile, In The Game Box... from 2 years ago, and the map of the Tomb of Tor-Kantor from Gone Mapping. Don't Wait Up. back in July. 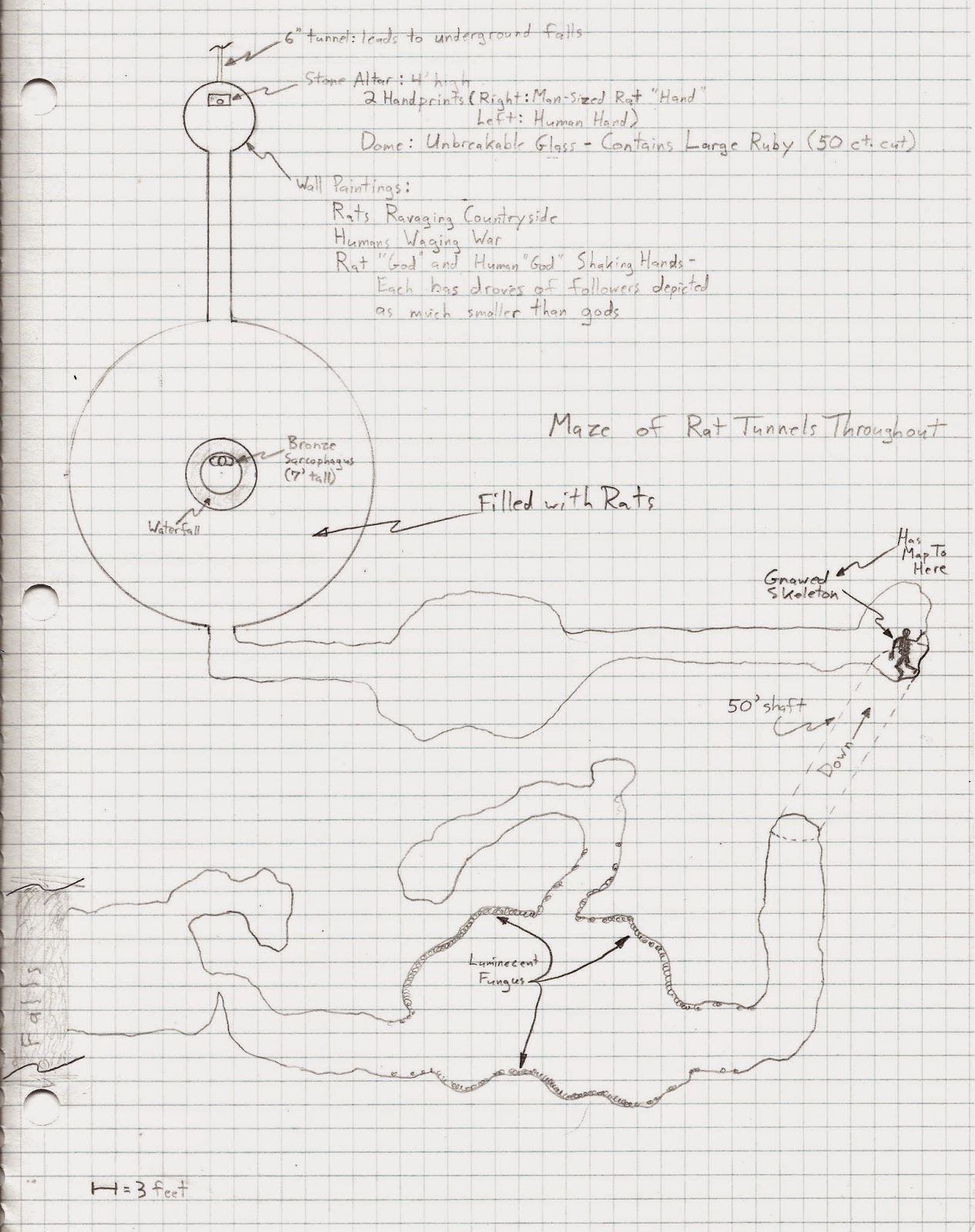 Exploration
The adventure led the party behind the waterfall on the lower left and into a natural cavern. There were a few rats scurrying about as the party explored. In the chamber with the luminescent fungus, they discovered a few more rats. The 50' shaft was tough to spot, as evidenced by the poor blighter who fell to his death years ago. His skeleton was gnawed clean by the veritable carpet of rats. Rat tunnels perforated the walls on this level, both high and low.

In the center of the round room, falling water formed a cylinder around a platform. A seven foot tall bronze sarcophagus stood, well-polished despite the water. A humanoid with a rat face adorned the sarcophagus. Rats congregated here, more than anyone in the party had ever seen. They didn't venture into the water cylinder, nor did they set foot in the hallway to the altar room. The party got the impression this was something akin to holy ground for rats.

The altar room depicted a war between rats and humans, and an apparent peace treaty between two "gods", one human, one humanoid rat. On the altar sat an unbreakable and apparently ummoveable glass dome protecting a golf ball sized ruby. Impressions of hands lay on either side of the dome, a human hand on the left and a human-sized rat paw on the right. A six inch tall tunnel led further into the depths of the hill to an underground waterfall.

Grab It & RUN
The ranger in the party pulled off a credible imitation of a rat-man when putting his right hand in the rat paw impression (by rolling a natural 20), and they managed to unlock the dome and get the ruby. But then every rat knew the party had the ruby, and they wanted it back.

What followed was the fastest 15 minute action sequence I've ever run as the party sprinted out, the mage clearing the way with a couple of well-placed Burning Hands spells, and the rogue making sure nobody tripped. If they fell, they would have been eaten. No save.

Scariest adventure ever, and the only monsters the party encountered were rats. Not even giant rats, these were normal, "let me step on one so I can get the 1 XP I need to level up" rats.

They heard the sarcophagus starting to open on the way by, and they rekindled the age-old war between rats and humans, but hey, at least they were rich.

I suppose this adventure fits the microadventure mold - there are really only 5 locations, and only one monster type to worry about. Huh. 27 years ago I was already a minimalist.

Thanks for reading!
Email ThisBlogThis!Share to TwitterShare to FacebookShare to Pinterest
Filed under: maps, microadventure, retrospective