Earlier this week I returned from a trip to Disney World. It was my first time, and more importantly my daughter's first time. We had a blast, and in seeing Disney through her eyes I rediscovered my sense of wonder.

The grind of daily life brings out the cynic in me. My imagination rebels against the repetition of work, and it lashes out. Sometimes it's funny; other times it's downright offensive. I didn't understand the big deal about Disney, but I get it now.

My daughter wanted to catch a show called "Cinderella's Christmas Wish". It was a 10 minute stage show in front of the castle, where everyone debated about how to decorate for the holidays until Cinderella makes the call and her fairy godmother makes it happen.

As she waved her wand we watched this... 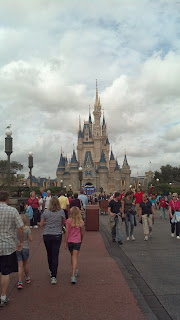 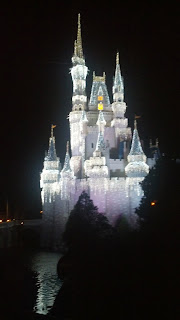 ...and in that moment I felt magic happening.

Don't get me wrong. I have a degree in theater. Intellectually I know it's a carefully staged production, reproduced every day at 6:15 sharp. I know there's some techie behind the scenes pushing light buttons on cue. I understand how the magic works.

But it's still magic.

I watched my daughter as she took it all in. The look of wonder in her eyes told the whole story. Her perception changed, and I think she has a greater sense of possibility after that experience. If she wants to build a life-sized castle, hang lights on it, and make those lights change colors, she knows it's totally doable - she had an example right there in front of her. What else can she imagine and eventually make real?

Magic isn't an effect we have on the world, it's the way our experiences change us. It's realizing we have more possibilities and more potential than we originally thought. The next trick is what we do with that realization and all that new-found power.

What should I dream up and create next? The possibilities are endless. They're also much more easily attainable after visiting my first hackerspace last night, but that's a different story.

I'll write up some ideas on how the Disney experience can apply to RPGs next week. Thanks for reading!
Email ThisBlogThis!Share to TwitterShare to FacebookShare to Pinterest
Filed under: after-action report, awesomeness, magic