Things are proceeding apace. I just wanted to take a few minutes and give a generic update here at the end of February.

Editing
The Whispering Road is coming along. The main book is in layout now, and I'm waiting to proof the PDF. I love the game - it's a fairly simple system of GMless collaborative storytelling, and I love the act structure and conflict system. If you missed the Kickstarter, keep an eye out for it later in March so you can grab a copy.

I've been editing Pocket-Sized Encounters for Iron Tavern Press, and there's an adventure slated every month for the rest of this year. If you need a bite-sized OSR adventure to fill in a night's gaming, give these a look. PSE2: The Hive is the latest. You get a 5-room dungeon crawl filled with demonic humanoid bugs, a broad-brush background with further adventure hooks, and a random table detailing the effects of an open portal to what's essentially the Elemental Plane of Cockroach. Yummy.

Thanks to Ben Gerber of Troll in the Corner, I've had the opportunity to edit some non-RPG tabletop game rules. This week I'll be working on Upgrade Wars, a card game about belligerence and 3D printing.

Other things are lurking on the horizon, and I can't wait to see what opportunities pop up over the next few months.

Performances/Events/Cons
I'll be singing The Peacemakers by Karl Jenkins at Mechanics Hall in Worcester, MA at the end of March. It's a demanding piece, and we've been rehearsing it off and on since October. We'll have around 120 voices on stage accompanied by an orchestra and the hall's spectacular organ. This should be very cool, but I need a new tux. 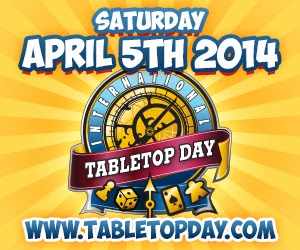 I'm hosting a Game Day on 4/5/14 in honor of International Tabletop Day. I'm still getting the description together into words that sound coherent, but if you're anywhere near Shrewsbury, MA that Saturday and want to play some games between 10AM and 5PM, come on down. Hopefully we'll be listed on the Tabletop Day site by sometime next week.

The Gamer Assembly will be speaking at PAX East this year. Tabletop Wars II got accepted, and it's running Friday night at 10PM. If you want ideas on what system to use when trying to pull off your offbeat RPG campaign idea, come put our brains to the test. We'll be recording it again this year, so stay tuned for the video after it's edited.

I missed TotalCon since I've been fighting off various sicknesses lately. Foo. Next time.

I've finally gathered Adventures in Elysium into a single document. It's over 30 pages of 10-point text. I'll be taking the rough edges off of it and converting it to Mongoose Traveller just for the ease of publishing under their OGL. I'll probably have a Classic Traveller version available as well, but I can't charge for it under the Traveller Fair Use Policy (PDF). I'm not really pushing to get this done anytime soon, but I just need to work on something of my own.

I want to prep an RPG or two to run at PAX East, and I'm not sure what to focus on. I've been reading up on Fate Core and FAE lately, so maybe I'll invest in some dice and get something prepped on that front. Or 4e Gamma World. Or I could dust off the D&D Edition War Gauntlet, but I think I'm already short on time to get all 6 systems prepped and runnable from index cards. We shall see.

Here's to the next couple of months! Buckle up, it's gonna be quick.

Thanks for reading!
Email ThisBlogThis!Share to TwitterShare to FacebookShare to Pinterest
Filed under: current projects, PAX East, RPG Editing