Irons in the Fire

Occasionally, I need to write something just to keep the projects I'm involved with straight. This is one of those times. I thought that I'd have more time after PAX East, but the Universe has conspired to keep me busy.

Writing Projects
I should be getting some editorial feedback in the next week for something I'm working on for Don't Hack This Game. I'm also getting ideas together for Dragon and Dungeon pitches. For those of you interested in submitting pitches, check out the list of dos and don'ts in Sweet Rejection.

Editing Projects
I've managed to make a site to offer RPG Editing services. In a bit of blind luck and timing, I managed to score an editing gig for an Open Design project. More details on that as it gets closer to release. I'm also wrapping up editing for Bare Bones Fantasy - check out this preview of the Adventure Idea Generation foldout. Suffice to say I'm fairly well booked editing-wise until mid-May. 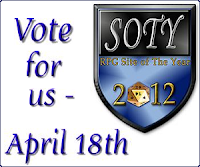 The Site of the Year Contest
As I posted about previously, Wombat's Gaming Den of Iniquity is in the running for the 2012 Stuffer Shack RPG Site of the Year Award. You can vote for me on Wednesday, 18 April 2012 - I'll be putting out reminders on Twitter and G+ and probably post another article asking for your vote then. I've also added an icon to the sidebar, which I'll update with a link to the voting site on Wednesday. It'll be a hoot, so come on back in two days and vote. Thanks in advance!

The Traveller Adventure Arc
I managed to finish this before PAX East, and if you're interested in reading it I'll direct you to the Adventure Arc Cover Page. I'm happy to not have it on my outstanding projects list any more. I'll transition over into editing, expanding, and reformatting it for sale as a PDF. I will absolutely maintain the hyperlinking to make the PDF more useful, though it may take me a bit to wrangle into a form that I feel comfortable releasing.

Art Spotlight Series
I'm featuring a visual artist almost every week in the ongoing Art Spotlight Series. This past week it was Brian Patterson of d20 Monkey - go give the man some love for his excellent webcomic and awesome gaming shirts. I'm more than happy to feature you or someone you know in this series. If you have an idea for someone to feature, give me a shout on Twitter or on Google+ or via email (jim AT twwombat DOT com).

The Gamer Assembly
I'm still curating the weekly collection of links which we post under the name The Weekly Assembly. We call this week's post The Crunchyfluff Debate. What can I say? I like showcasing awesomeness. We're always exploring and tinkering with RPGs, so feel free to use the group to help brainstorm if you're stuck for what to do next in your game. If you want to chat, feel free to drop by the Gamer Assembly Web Chat.

Actual Gaming
Need more. I'll be scheduling another potluck gaming day sometime soon, probably sticking with board games, but we'll see what happens. Between the writing and editing and my day job, it feels like there's no time left for playing games. This must change.

Plenty of irons in the fire. Good thing I have my positive attitude to fall back on. Thanks for reading!
Email ThisBlogThis!Share to TwitterShare to FacebookShare to Pinterest
Filed under: Gaming Projects