Welcome to Fellport, my #City23 Project 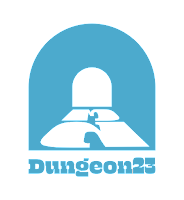 I got caught up in the buzz surrounding #Dungeon23, and come to find out it offers variants! I've seen #Facility23, #NPC23, and #City23. Since I've been wanting to flesh out the main city in my current 5E campaign, #City23 jumped to the front of the line. And I figured I'd dust off the Den of Iniquity while I'm at it.

The initial #Dungeon23 post on Win Conditions lays down some ground rules. First, get something on paper (virtual or otherwise) every day. As Sean quotes his favorite creative advice: Have Something To Show For Your Time. It doesn't matter if it's a room name with "Empty Room" next to it - it's something.

Since I'll publish as I go, this will get messy. Unsub if you need to, as I'm sure we will see days with nothing more than "Enid's Apothecary: Burned and abandoned." As blog posts go, things like this may cause drowsiness. But as Sean says:

Yes, Fellport sits at the heart of my current campaign. Yes, I can (and will) cheat because I have several locations named and roughly fleshed out in my head (and rarely on paper). Yes, my players may cheat by reading the descriptions, though I'll keep secrets to a minimum, and they're currently off trying to get themselves killed by ambushing the leader of an army of devils and demons IN HER STRONGHOLD. But I digress.

As a teaser, I thought I should share the hastily-scrawled map that I slapped together near the start of the campaign... 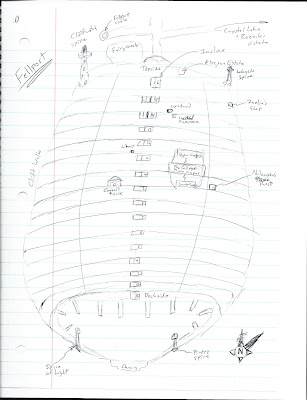 Yes, I scribbled it in a lined notebook. Sometimes we play things where they lie.

The history of the world of Beneterra comes to us through the lens of empire. Ionia conquered much of the continent and rewrote history to disavow and belittle any major civilization that came before it, though some still remember a time before the imperial armies took over. In recent years, Ionia has lost much of its edge after the fall of the Emperor and the reinstatement of the Senate. Much former glory and territory have left the Republic of Ionia through the endless squabbles between partisan camps in the Senate.

Fellport lay fairly close to the capital of Ionia, a city of trade fostered by the family who first settled there. Fellport became synonymous with lower classes of people and the unwanted non-human population, a parody of imperial purity and wealth. That attitude led Fellport to declare independence shortly after the Emperor's fall, installing a 5-person Council to guide the city's development, trade, and diplomacy. The former unwanted masses came together to build something wonderful and get rich while they were at it. Today Fellport stands as a jewel of diversity, welcoming all to her 16 tiered streets to make their own fortunes.

Fellport clings to the side of a steep and ancient crater, the base of which provides the deepest known harbor in the world. Her 16 levels boast a variety of shops and living conditions, from the endless cargo transfers at Dockside, through the bustling population of would-be magic-users on College Row, to the stately manors off the beaten path at Topside. The greater the distance from the harbor, the greater the general wealth and sophistication, though exceptions abound.

Beneterra exists squarely in the realm of High Fantasy, with teleportation available to the (rich) masses and franchises dedicated to magical inventors. Past empires await discovery, and cosmic secrets lurk in the wonders of modern magical technology.

As this project moves forward, I'll probably make an index post to keep track of all the entries. I'll also cross-link between entries as needed, so hopefully I'll end up with something resembling a #City23 wiki for Fellport. After that? Let's get something in the can before we entertain notions of grandeur, shall we?

Since there won't be any kind of narrative flow to the entries, I decided to order points of interest by location. NPCs are mentioned within locations. As entries get added, I'll add links here.

Email ThisBlogThis!Share to TwitterShare to FacebookShare to Pinterest
Filed under: #City23, #Dungeon23, Fellport